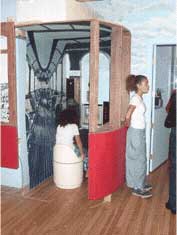 Client Requirements:
A system of capturing on video the stories of museum visitors. The visitors were also to be able to look at their story and the stories of others at any time.

Visitor Experience:
The visitor drops a loonie (Canadian $1 coin) into the fare box to initiate recording. After a brief countdown their 1 min story is captured on video. Using pushbuttons the visitor can play back their own and other stories. The video is actually captured directly into a computer. Up to 120 different clips are in memory at any time. Custom software was produced to allow museum staff to archive the stories onto video tape.

Mystus Expertise:
Mystus provided all hardware and custom software. An elegant coin mechanism was fashioned to include an old transit fare box, since the exhibit was themed as inside a bus. The visitors drop in a loonie to record a story.

Unique Features:
Not only was the software created to capture and play back video clips for visitors in a simple user interface, but also a set of software utilities was created for staff. These utilities allow archiving and clip editing. One feature included is the ability to create a list of favourites that the visitors can select from.

Project Challenges:
This was done when the speed of computers was just barely fast enough to capture quality video. Mystus created some ground breaking code to implement the concept of this exhibit. The advantages of going digital were well worth the effort. There are no mechanical parts in the system so maintenance problems associated with tape players were eliminated. Also, the functionality of allowing the visitors to easily and quickly review theirs and others’ stories was made possible.

Client/Visitor Feedback:
It was expected that only a few visitors would capture their story each day since it cost a dollar and the visitor interaction is fairly long (2-5 mins). The exhibit is hugely popular, however, and draws large crowds around the one who is telling the story. The memory quickly fills up in a few busy days and archiving them fast enough is the only difficulty. Thought of originally as a private exhibit, we were pleasantly surprised to see friends coach and encourage each other to ‘do a story’ and parents actively work with their children to do one.