Exploring how Canada Post, Canadian Pacific Railway and the Hudson’s Bay Company have contributed to the development of the nation

The exhibition opened at the Canadian Postal Museum at the Canadian Museum of Civilization, in Gatineau Quebec, this past November and will remain there until November of next year. From 2005 to 2008, it will travel to each province and territory. The exhibition brings together some 150 rare and never-before-seen artifacts and is enhanced by oral history interviews and audiovisual presentations.

Two Audio Kiosks: The visitor selects a button on the front panel and the corresponding audio track plays immediately through the audio wand. One kiosk has three tracks in two languages, the other six.

“On The Job” Video: This video is about 3 minutes long and loops continuously. There is a background audio track set to a low volume.

Concluding Video: The visitor selects either of the lit English or French start buttons. The selected button begins to flash and the corresponding video begins to play after a couple of seconds. Both screens are coordinated together to be one viewing experience. Once started the buttons are inactive for 15 seconds to prevent abuse. They become active when they light up again.

Wishmakers: This is a low tech interactive. The visitor selects from the many furniture pieces and arranges them in the room on the graphic. The furniture is magnetic and sticks when placed. 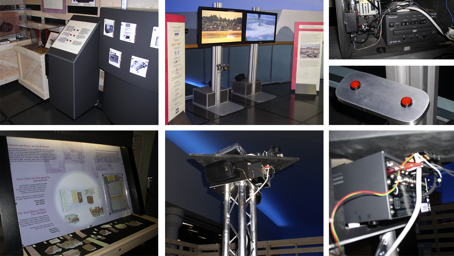